UX writing is the practice of crafting UI copy that guides users within a product and helps them interact with it. UI copy includes buttons and menu labels, error messages, security notes, terms and conditions, as well as any instructions on product usage.

The primary aim of UX writing is to settle communication between users and a digital product. In this article, I'll provide some practical tips on effective UX writing.

All too often product developers think of UI text as something that belongs to product documentation phase."First we'll design the product, and then we'll hire someone to help us write a UI copy." Such assumptions often cause a lot of harm because critical UI issue can go unnoticed until the later stages of product development process. That's why UI text should be written earlier in the process.

Professional UX writers should work together with software developers and designers on crafting UI text. As a part of this activity, they often ask product team to explain design decisions. If a team has trouble explaining a design, quite often it is the design, not the text copy, that needs improving.

Concise doesn't mean limited; it means something closer to efficient. Use as few words as possible without losing the meaning. When writing concisely, we make sure every word on the screen has a job. Follow Mark Twain's advice:

"Writing is easy. All you have to do is cross out the wrong words."

When using a product, users aren't immersed in the user interface itself but in their work. Consequently, users don't read UI text - they scan it. Help them scan the text by writing it in short, scannable blocks. Chunk text into shorter sentences and paragraphs. Keep the most important text up front and then ruthlessly edit what comes after it.

Write short and then cut it into half

Don't: I do not want to unsubscribe

4. Begin with the objective

When a sentence describes an objective and the action needed to achieve it, start the sentence with the objective.

Don't: To see item's properties, tap on it

Do: Tap on item to see it's properties

5. Use specific verbs whenever possible

Specific verbs (such as connect or save) are more meaningful to users than generic ones (such as configure or manage).

Inconsistency creates confusion. One typical example of inconsistency is replacing a word with a synonym in a different part of the UI. For instance, if you decide to call the process of arranging something "Scheduling" in one part of UI do not call it a "Booking" in other parts of your UI.
Another common pitfall is combining forms of address. Don't refer to the user in both the second person and the first person within the same phrase.

One of the significant characteristics of effective UX writing is clarity and simplicity. For clarity, you need to remove the technical terms and use familiar, understandable words and phrases instead. It's especially important to avoid jargon in error messages.

Avoid using the future tense to describe the action.

Don't: Video has been downloaded

9. Write in the active voice

The passive voice makes readers yawn. Compare this sentence in both voices:

Don't: The Search button should be clicked when you are ready to search for an item.

Do: Click the Search button to search for an article.

Use numerals in place of words for numbers.

Don't: You have 2 missed calls

Do: You have two missed calls

11. Avoid showing all details up front

Sometimes it might be helpful to provide additional information or supplemental instruction for users. But all too often such details are presented upfront. Too much information can quickly overwhelm users. Thus, reveal detail as needed. Use a mechanism of progressive disclosure to show more details. In the most basic form, this mechanism can be implemented as 'Read more' link to the full content.

Progressive disclosure is especially good for mobile UI (where designers have a limited screen space to work with).

Users don't like surprises. They hate situations when they're expecting one thing, and end up with another. People should be able to tell at a glance what an element does.

Choose labels that clearly communicate and differentiate what the object does.

When labeling buttons and other interactive elements, use action verbs, such as 'Connect,' 'Send,' 'Subscribe' instead of vague 'Okay' or 'Submit.'

13. Be careful when using humor

A lot of designers say that incorporating humor in UI makes it sound more human. But similar to any other component of UI, humor should be designed. People are likely to read the text in your interface many times, and what might seem clever at first can become irritating over time (especially if you use humor in error messages). Also, remember that humor in one culture doesn't necessarily translate well to other cultures.

14. Use language that's consistent with the user's platform

The terms we use when describing interaction with a desktop app do not necessarily apply to mobile platforms. For example, if you design an iPhone app, we can't say 'click' when referring to the action. We need to say 'tap' instead.

People don't use the date when they refer to the day before the present day. They say 'yesterday.' The same principle can be applied to UIs. Instead of giving a date, say 'today,' 'yesterday' or 'tomorrow.' It prevents users from using calendar each time they want to know when the event happened. But remember that these terms can be confusing or inaccurate if you don't account for the current locale.

16. Use graphics if they will help you communicate

Human beings are incredibly visual creatures. An ability to interpreting visual information is hard-wired into our brains. In some context, it might be nearly impossible to say something in words. That's where imagery can support us and make text comprehensible. Below is an example which helps users to find specific information. 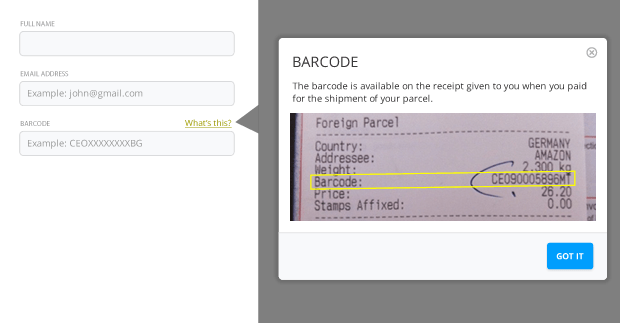 It is not obvious where the users can find the barcode and concise help text next to input fields might be very useful.

You may be surprised at the time and effort it takes to write effective UI text. But believe me, it worth it. Every word in your app is part of a conversation with your users. And it's your goal as a designer to design this conversation to be effective.

3 Common Ways To Use Illustrations in UI Design

A picture is worth a thousand words. Since the beginning of time, people know that a complex idea can…