UI design is moving towards removing any unnecessary elements to focus much more on functionality. But while functional aspect of a design is key to product success, visual details are equally important — particularly how they can improve those functional elements.

In this article I’ll show you how visual elements, such as shadows, carry information that is processed by the user of the interface.

Evolution of UI: From Pseudo 3D to Ultra-Flat Design

Three-Dimensional Effects and Skeuomorphism: Illusion of Depth In the Interface

Users screens are flat, but designers and developers invested a great amount of art into making just about everything on them appear be 3D. Since the early days of graphical UIs, screens have employed pseudo 3D effects (shadows, gradients, highlights) to help users understand the available actions at a glance. Such 3-D effects give an illusion of depth to an interface, they help users interpret visual hierarchy and understand which elements are interactive:

Windows 95 dialog box clearly demonstrates how the use of shadows and highlights can create 3D effects:

Notice how the buttons appear raised and the input fields appear sunken
Skeuomorphism was an evolutionary jump for this idea. It’s a complete language of imitation where each UI element mimic real-life object in digital space. In the digital world, skeuomorphism is often associated with Apple products (especially iOS before 7), which provide a great example of how it often looks in digital design. Just take a look at Apple’s Newsstand app design. It has skeuomorphic bookshelf design, complete with three-dimensional ‘shelves’ and wood textures. The bookshelf metaphor was intended to help users understand how to use the interface. ![](/content/images/2016/07/1-tsRQeoRR3eVTm7PWfzhOoA.png)
Newsstand in Apple iOS6. The drop shadows and textured background is made to mirror physical products
However, *early* pseudo-3D GUIs and skeuomorphism often produced clunky interfaces — GUIs tended to be heavy and visually distracting.

Flat Design: When You Remove Shadows You Reduce Discoverability

For every action, there is a reaction. And in the world of digital design, flat design was a reaction against skeumorphism. Since anything on a screen will never truly look three dimensional, why not to stripping away illusory decoration and focus on functionality instead?

Unlike three-dimensional design or skeuomorphism, original flat design don’t even try to reproduce the appearance of the physical world. It’s literally flat. There’s simply no lighting model which cast subtle shadows that indicate what’s clickable (because it looks raised above the rest) or where you can type (because it looks indented below the page surface). 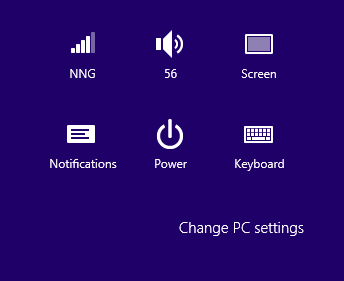 The Windows 8 UI is an example of ultra-flat design
Everything looks *too flat*, and in fact “Change PC settings” looks more like the label for the icon group than a clickable button and, as a result, many users simply overlook this option. Users typically overlooking or misinterpreting such GUI components because of the low distinctiveness of the elements and the poor perceived possibility of action.

There’s a reason GUI designers used to make objects look more detailed and actionable than they do in the ultra-flat design — signifiers (such as glossy, raised effects on buttons, or inset shadows that made input fields appear empty). Even though signifiers varied from app to app, users could usually rely upon two assumptions:

The effect of signifiers before and after Flat Design. Image credit: NNGroup
Thus, complete removing visual distinctions to produce fully flat designs with no signifiers is a bad extreme. Users need signifiers to know where they can click/tap on a page: perceptible clues that help them understand how to use interfaces. And shadows are invaluable cues in telling the human brain *what user interface elements we’re looking at*.

Recently, designers have begun to realize the usability issues of flat design and as a result, a more balanced interpretation of flat design has emerged. New solution sometimes referred to as ‘almost flat’ or ‘flat 2.0’ design. This design style is mostly flat, but makes use of subtle shadows, highlights, and layers to create some depth in the UI.

Google’s Material design is a good example of flat 2.0 with the principles borrowed from physics to help users make sense of interfaces and interpret visual hierarchies in content. It provides visual simplicity without sacrificing signifiers. 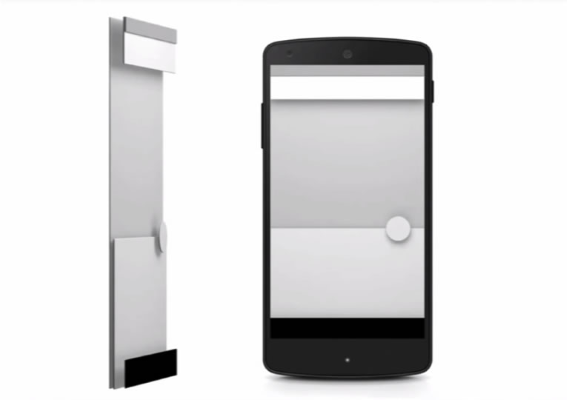 Powerful Z-Depth in Android GUI
##Shadows and Elevation Modern interfaces become more layered and taking full advantage of the z-axis. This approach gives a sense of *depth* to the interface making the experience more *tangible*. ![](/content/images/2016/07/1-02GDXjZOSIXTK_PIApEQlA.png) And shadows can give this impression of depth — images and elements with shadows seems to pop off of the page. They give a bit of visual spice to the design without becoming a distraction and help users make sense of interfaces:
Without a shadow, nothing indicates that the bright round circle is separate from the background surfaces
The shadow grows softer and larger as the object’s elevation increases and grows crisper and smaller as the elevation decreases.
Shadows work in tandem with elevation. Elevation is the relative depth, or distance, between two surfaces along the z-axis. Measured from the front of one surface to the front of another, an element’s elevation indicates the distance between surfaces and the depth of its shadow. ![](/content/images/2016/07/1-QCy3CR31wDbuIDfOsmQPQQ.png)
Multiple elevation measurements for two objects in Material Design
When users don’t feel confident that something is clickable, they need immediate reassurance after clicking/tapping. And here elevation enters the scene. An object’s elevation determines the appearance of its shadow: ![](/content/images/2016/07/1-ZIZSTlUWe5Vog-jXBiH5og.gif)
Button lifts on press. Image credit: materialup
![](/content/images/2016/07/1-KOtqbe7PnCJQ5_w7qP9uXw.gif)
The card lifts to indicate an active state.

Your design shouldn’t rely on heavy drop shadows, extreme gradients, or complex lighting effects, all of which can distract users from their purpose. But subtle shadows and other ‘non-flat’ user interface elements can be good for your design because they hold an important information value —  they help to create signifiers in the interface. Users prefer things that are simple, clean, and ordered and designers should try to guide human perception of the interface. When you examine the most successful interaction designs of recent years, the clear winners are those who execute fundamentals flawlessly.