“Rate this app!” pop-up dialog has become a common thing and it’s hard to go a few days without being prompted to leave a review. Such requests are pretty annoying in far too many mobile apps today: 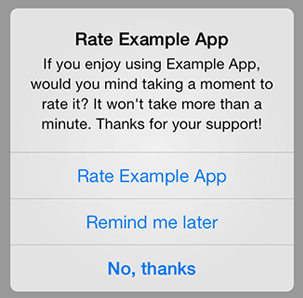 This lazy approach was critiqued by John Gruber, of Daring Fireball: "I’ve long considered a public campaign against this particular practice, wherein I’d encourage Daring Fireball readers, whenever they encounter these “Please rate this app” prompts, to go ahead and take the time to do it — but to rate the app with just one star and to leave a review along the lines of, “One star for annoying me with a prompt to review the app.""
Pestering users to rate the app is tacky and unacceptable these days. However, encouraging users to rate your app is essential for your business. In this article we’ll try to find an answer to the question: “How can I prompt my users for rating and review without driving them nuts?”

Why Ratings And Reviews Matter

App ratings can positively or negatively affect important aspects of how people discover our apps. Reviews can literally make or break the app:

It makes perfect sense for us as developers to do everything we can to maximize the positive marketing of our apps. With this in mind, lets take a look at some of the better ways we can ask customers for reviews.

App reviews just don’t happen by themselves. Something should be done to encourage users to leave ratings and reviews.

Don’t: Interrupt Customers In The Middle of Tasks Or at App Launch

“Ask and you shall receive.” The easiest way to get an app review from users is to ask them to do it within your app. Unfortunately, most apps ask at the inopportune time —  they’ll prompt users at launch or after a certain number of launches. Modal pop-ups interrupt a user’s workflow and demand that users either leave a review now or be reminded later. If you have used a mobile device before, you have almost certainly seen a dialog that looks something like this: 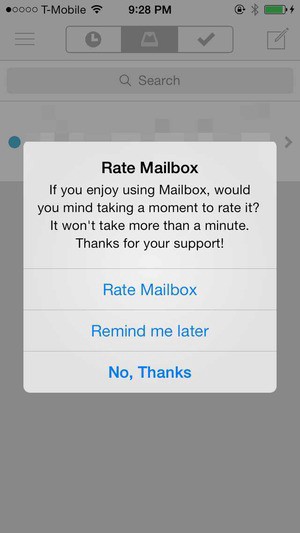 No one likes a pop up
Asking such question at launch is hands down one of the worst possible times to ask. Think of how this plays out for a typical user. They’ve just opened an app and are interrupted with, “Hey, could you rate this app now!” But the fact is, no one really wants to be interrupted, much less for something irrelevant while they’re in the middle of doing important task. It’s no surprise that showing a ratings prompt on launch is [50% more likely](http://www.apptentive.com/blog/ratings-prompts-dont-have-to-suck-inside-mobile-apps/) to result in the app being closed than if it’s shown at any other point in the app. This practice is offensive and it’s really no wonder users and critics have condemned the use of “rate app” dialog.

Don’t: Prompt For Review With Each New Version

You should trigger “Rate the app” dialog only once. Ensure that the user never sees the dialog again if they select the “No, Thanks” option.

Do: Choose a Proper Moment To Ask For Review 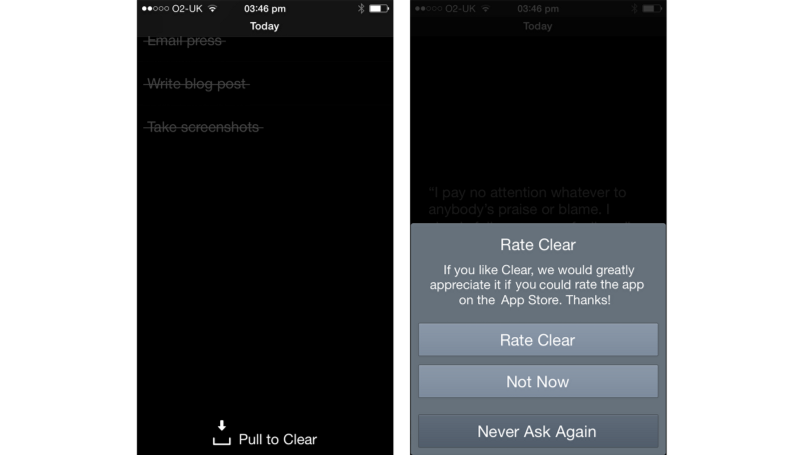 Find the right time to ask for rating, just like Clear app did
To quote [Dan Counsell](http://dancounsell.com/articles/prompting-for-app-reviews): “Clear for iOS shows the “Rate app” dialog after a few conditions have been met, firstly the user must have been using the app for a few weeks, secondly Clear will only ask after the user has cleared the remaining tasks from a list. This is a great moment in the app; users are feeling good for having just cleared their todo list and in most cases are just about to exit the app.” **Takeaways:**

The trouble with the pop-up approach is that the app is interrupting the user’s natural workflow. A method that’s more integral into the experience is a better way to prompt for review:

Do: Ask Outside the App

You can gently ask for reviews in the update notes. It’s more polite than prompting in the app, and it definitely increases the number of reviews when an update comes out. Castro is a good example of this in action. 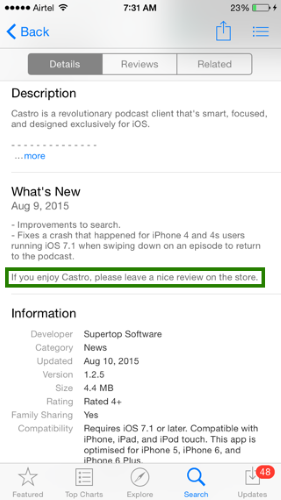 Their statistic shows that most engaged users do read information on updates though, and by giving actual details about what’s changed they can keep them interested. This group is more likely to give a positive rating.

Takeaway: Asking politely at the end of your update notes is an effective way to encourage users to leave you a review without compromising the user experience within your app.

Do: Engage With The Users To Learn About Their Experience

Just asking people to rate the app is much less effective than starting a conversation with your users, especially when they aren’t happy. Enabling communication at key moments in the consumer’s journey — when they’re happy, frustrated, or lost — gives you a chance to understand their problem and often yields actionable feedback.

It’s common for apps to include a static “Send Feedback” button that just pops open an email form. But for very little effort, you can integrate proactive support into your app and communicate directly with your users. Services like Helpshift make it possible for apps to establish a live two-way instant messaging. So, the next time your users need help, they can receive it just-in-time. 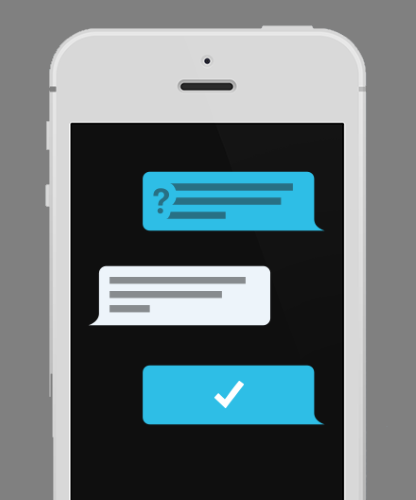 Provide a direct support to your users
**Takeaway:** The best route to a good app review is to provide exceptional customer service. Start a dialog with your users and once you have helped them, you can ask for review.

There’s nothing wrong in asking for a review, but remember that you want to give your users a great experience first. Build a great app and focus on making it delightful, not annoying. The more people will be satisfied with your app, the more likely they will want to leave a positive feedback and tell others to try out the app.