Generic radio buttons control
Radio buttons are great when used correctly — they prevent users from entering erroneous data, since they only show legal choices and come with a lot of nice features, such as keyboard navigation and reliable rendering across platforms. In this article, we’ll overview practical guidelines for Radio Buttons that have been crafted from usability testing.

Only one button can be pressed at one time. Image credit: Tumblr
#Best Practices for Radio Buttons ##Use Radio Buttons Only For Settings *Use radio buttons to change settings, not as action buttons to perform commands.* Also, the changed settings should not take effect until the user clicks the command button (labeled “Proceed” or “Save” for example). If the user clicks the Back or Cancel buttons, any changes made to radio buttons on the page should be discarded and the original settings reinstated. 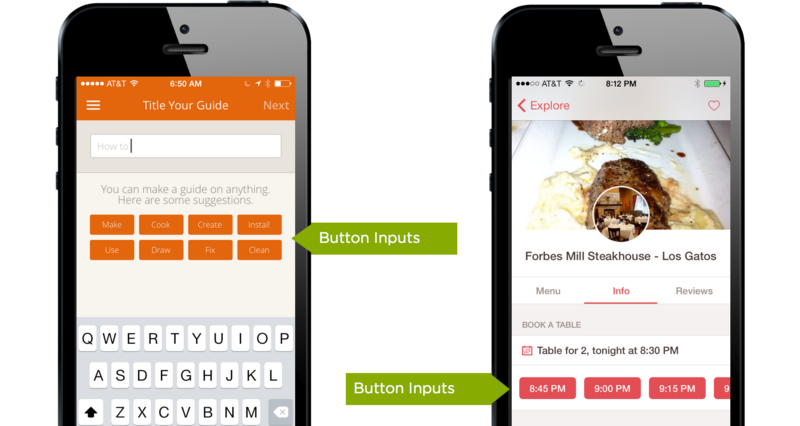 Button inputs make selecting them a single-tap action. Image credit: LukeW
##Logical Order For Options You should list the options in a logical order, such as most likely to be selected to least, simplest operation to most complex, or least risk to most. Alphabetical ordering is not recommended because it is language dependent and therefore not localizable.

Left: Gender in drop-down menu. Right: Gender in radio buttons
##Avoid Nesting *Avoid nesting radio buttons with other radio buttons or checkboxes.* You should keep all options at the same level to avoid confusion. ![](/content/images/2016/05/1-WzeH5eN3K4ryVn6KoTm9RQ.jpeg)
Using nested options adds unnecessary complexity
##Use Animation and Visual Feedback Well-designed animations make the experience feel crafted. User interface elements like radio buttons should appear tangible, even though they are behind a layer of glass. Visual and motion cues acknowledge input immediately and add clarity through visual reactions to user input. ![](/content/images/2016/05/1-YEmB6t9x0-0JRSpvTM2kTQ.gif)
Image credit: Dribbble
#Would a Check Box be a Better Choice? If there are only two options, you could use a single checkbox instead. However, checkboxes are suitable only for turning a single option on or off, whereas radio buttons can be used for completely different alternatives. ![](/content/images/2016/05/1-JjQTUIbWNM1x5OMVuyAVGw.png)
Checkbox control. Image credit: Material Design
You should remember following moments if both solutions are possible:

Select orientation for the document (Landscape or Portrait)
**Wizard.** You should use radio buttons on wizard pages to make the alternatives clear, even if a check box is otherwise acceptable. Designs with a radio button selected by default make a strong suggestion to the user. The default choice may lead the users into making the best decision, and may increase their confidence as they proceed. ![](/content/images/2016/05/1-Hjtz5ltc9pgfpco5Xb6jnQ.png)
If an option is strongly recommended, add “(recommended)” to the label. Image credit: Dropbox
**Simple Yes or No answer.** Using a checkbox is correct when you have a single simple question and the user will answer either “yes” or “no”. ![](/content/images/2016/05/1-3ETGOUNaY9mHoR_WNWQdFQ.png)
Simple question can be asked in a form of checkbox
#Conclusion When designing radio buttons, most important to follow design standards, because this enhances users’ ability to predict what a control will do and how they’ll operate it. Conversely, violating the standards makes the user interface feel brittle — as if anything can happen without warning.